Hello and welcome to exampundit. Here is a set of Reasoning Quiz on New Coding Decoding Problems & Puzzle Problems for bank exams. 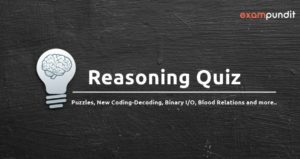 2. Which movie was released in January?
(A) Newton
(B) Padmavaat
(C) Rustom
(D) Padman

3. Which movie got the highest collection?
(A) Rustom
(B) Bajrangi Bhaijan
(C) Padman
(D) All of them

5. Which movie was released in April?
(A) Rustom
(B) Padmavaat
(C) Newton
(D) Padman

Solution:
1st digit: if the second letter is a vowel then use * and if it is a consonant then use $.
2nd digit: different symbol for first letter of the word:
F- @
A- ₹
D- %
M- #
3rd digit: total number of letters