Hello and welcome to exampundit. Here is the a set of Puzzle and Direction Quiz for SBI PO Prelims 2017.

1-4
Subham starts walking from his school. He walks to the east
for 10 kilometres to reach the gym and in the midway he passes a shop. If he
returns to the shop and walks to the south for 10 kilometres he reaches a
temple. If at the temple he turns to the right and walks 2 kilometres, he
reaches the college. But if he walks 15 kilometres to the southwest of the
temple, he reaches a pond. From the pond, he walks 20 kilometres to the east to
reach the stadium. There is a pool 10 kilometres to the northwest of the
stadium. If he walks 10 kilometres to the south from the pond, he reaches the
park. At the park, if he turns to the left and walks 8 kilometres he reaches
his father’s office.
1. School is at which direction with respect to his father’s
office?
a) S
b) N
c) NE
d) NW
e) none
2.What is the distance of shop from the gym ( in
kilometres)?
a) 5
b) 10
c) 15
d) 2.5
e) None
3.Pool is ____ to the park.
a) NE
b) N
c) NW
d) SE
e) SW
4.If Subham is standing at the college facing to the west,
in which direction does he needs to turn before starting to walk for reaching
the pond?
a) Right
b) Left
c) 2 times left
d) 2 times right
e) None
5-9
P, Q, R, S, T and U are six representatives of six countries
viz. Iran, India, China, Iraq, Brazil, Japan but not necessarily in the same
order. They are sitting around a circular table
facing towards the centre for raising discussions on  six different topics viz Terrorism,
Healthcare, Education, Recycling, Environment and Global warming. But not
necessarily in the same order. Only one person raises discussion on one topic
only.
(a) ‘Global warming, Education and Recycling discussing
persons are neither from ‘Iraq’ nor from ‘Iran’.
(b) Representatives from ‘India’ and ‘China’ are neither is
discussing ‘Global warming’ nor ‘Education’.
(c) U is neither from ‘Iraq’ nor on the immediate left of
the person who has pointed ‘Environment’.
(d) The only Representative who is between ‘T’ and ‘R’ is discussing
‘Healthcare’.
(e) ‘P’ has his discussion about ‘Terrorism’ and he is from
‘India’. He is facing the person who has his views on ‘Healthcare’.
(f) The one who is delivering about ‘Global warming’ is
seated opposite to the person who is from ‘Japan’, while India’s Representative
is on the left of the person, who is discussing Recycling.
(g) One who discussed about ‘Terrorism’ is on the immediate
right of Japan’s Representative but on the immediate left of the person who has
briefed about ‘recycling’.
(h) ‘S’ is not discussing ‘Education’ while ‘R’ has no
points for ‘Global warming’. R has discussion about environment and immediate
left of the person who discusses education.
5. Who among the following is Iraq’s Representative?
a) P
b) Q
c) R
d) S
e) None of these
6. The only Representative between P and R is noticing which
of the following topics?
a) Recycling
b) Healthcare
c) Global warming
d) Environment
e) None of these
7. Who among the following has a discussion about Recycling?
a) T
b) U
c) P
d) R
e) S
8. Which of the following is correctly matched?
a) P-India-Environment
b) Q-Brazil-Education
c) T-Brazil-Global warming
d) U-Iran-Recycling
e) None of these
9. Terrorism’ discussing person is from which country?
a) Brazil
b) India
c) Japan
d) Iran
e) None of these 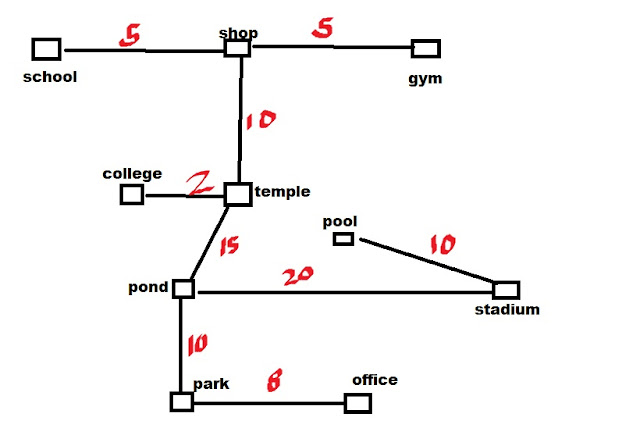 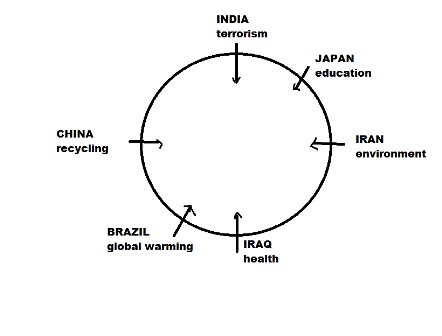