Hello and welcome to exampundit. From now on we will be rolling out Pop-up Quiz (PUQ) every week, multiple times. The Quizzes will have 15 questions, and will be having challenging time limit. We will be sharing Pop-up Quizzes 2-3 times a week on various subjects i.e. Reasoning, Quantitative Aptitude, English, Computer Knowledge & General Awareness. 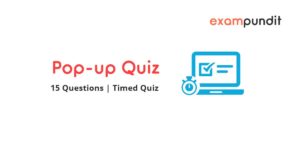 The following Set of Puzzle is for IBPS Clerk & RBI Assistant Mains examinations.

You have already completed the quiz before. Hence you can not start it again.

You have to finish following quiz, to start this quiz: