Hello and welcome to exampundit. Here are the GA Questions asked in Syndicate Bank PGDBF 2018 both shifts today. A big thanks to Shashank for sharing the questions with us. 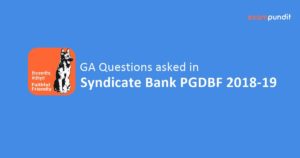 Both letters and Essays in 150 Words

The Questions are available as Free PDF format in our app. – DOWNLOAD APP!